the hub of black gold

The total polulation of bhupalpally city has been found to be more than 60000 as per the unofficial sources information but the official govt records shows very less. Officially the total population of the bhupalpally mandal is 57673 in which 50.56% are males and 49.43% are females.  A big number of migrants have been found over more than one decade i.e. 1993-2005. As per the knowledge of bhupalpally local people those who are native of this city since more than 3 decades, the population the population of bhpl was a few hundred upto 1980’s. A significant change in the population was started from 1990’s. The native people of bhpl before 1990’s were all scheduled and backward people.

Before going to the schools in bhupalpally, Its our duty to remember the famous schools near to bhupalpally i.e.  in jangedu. The govt high school in Jangedu is one of the famous and Sri Vivekananda Gurukula vidhyalayam is one of the most famous gurukulas in Warangal district since 1990’s. This is very unfortunate that this school has been closed due to some problems of the management. This school was ran for almost 2 decades successfully with the blessings of Late Bheem Rao and grabbed many district level ranks in the public exams. The Dream of Bheem Rao is to establish a good educational institute in this area with full facilities and also the higher educations should be reached to the poor students and to the remote areas. This has shown good direction to many educators in bhpl area and gave many educated well charactered people to the society. The main initiator for this school is Mr. Bheem Rao who had been killed in a naxals attack. Later this school went to Mr. Narsingarao who maintained this school for long time. Another school is Kakateeya hich school which was started by Mr. Linga Reddy and still successfully running by the same management even after facing many economic and medium problems. The contribution made by Late Bheem Rao and others are not measurable. They are the true educators in this area and given many diamonds to the bhupalpally area through their schools.

The first school in bhupalpally was the govt school and then Sri Vivekananda vidhyalayam which was the dream of late Bheem Rao and presently it is successfully running by Mr. Kuluguri sanjeevarao. CSI School is the first English medium which is also running still. The second school in bhupal pally was Sri Ramchandar high school in LB nagar by Mr. Ravi kumar. No words to say the contribution of this management for the cultural and sports developments in bhupalpally. Later many schools came into the picture like Santhinikethan high school, Teja High school, kerala model school, vignan, rahul, Prathibha vidyamandir, Sadhana, margadarshi, bharathi high school, SMS, Motessory high school,

The managements of the schools like SMS, SVN, Teja and others are encouraging the students for scouts & guides and also NCC and the students are participating in state and national level events.

Until 2000, nobody is offering any type of higher education like intermediate after high schooling. In that time, a golden era has been started for the sake of bhupalpally students and parents. That is the birth of Siddartha Jr. College. This college was started few students about 25 in which more students are in commerce. Since that time, this college is successfully goingon by grabbing many ranks in division level as well in district level. A few names to mention here is kiran, Ashok, Srinivas, chandu, sripal, naresh are the products of SJC. ( please contact other colleges also).

After SJC, telaswini jr. college has been started to promote our students and doing good job in educating the poor students as well. And in the recent years, many colleges like pavithra, saraswathi and others also established based on the response from the parents and students.

Students achievements in inter and degree: contact the colleges

The people like Kiran, Ashok, girls and others are shaping their career in research in the advanced fields like Nanotechnology, Pharmacy respectively and publishing their results in international peer journals. Mr. Nagaraju who is a student of Sangamithra Degree College is an excellent student and wants to build his career in chemistry in the future. BHPL PF is giving its full support to him for shaping his career in R&D.

Many people who studied in bhupalpally are settled in many other advanced areas like biotechnology, microbiology also. We are glad to few people who are the products of famous educational institutes like IITs, NITW, VIT, SRM, JNTU and OU are Kumar, Sharath naik, Tarun (from IITs), Mallikharjun E, Srinivas Dasari, Shivakumar, Kishore, Praveen, Suman (from NITW), Siddhartha, Sandeep, Kiran D. (from Vellore Institute of Technology University-VIT Univ). These are just a few. We have many more and more…

Apart from the research, somany people have grabbed the Govt jobs in central as well as in the state govt. govt teachers are uncountable, few people like Rajendar stood 9th rank in BSNL JTO test in the state level who is also the topper of JNTU, anantpur 2000-2004 B.Tech. EEE batch. Pradeep G. is as a communications engineer in VSNL, Chennai.

Uncountable IT employees have born in bhpl and studied their schooling in Bhupalpally. Here we are interested to put some of the great IT professionals who are working in the IT sector from many years. Thirupathi rao (SAP Expert), Srinivas (ORACLE Expert), Madhu (JAVA Expert), Ramakrishna (multimedia and MAYA expert), Mallikarjun (.NET expert), Ashok Reddy (Testing expert in USA), Siddhu (C, CPP, JAVA Expert) are successfully continuing their career in IT sector.

The daily turnover of the market in bhupalpally is more than Rs. 3 crores per day as per the unofficial source information. The famous shopping has been established in the main roads. The famous shops like Raghupathi & bros clothshow room is the oldest and biggest cloth showroom in the city and they have recently started the credit card payment option. Also we have many more other cloth showrooms like bhupalpally, Sri sai, swathi, …… Many branded T-Shirts and jeans wide veriety of dresses are available in bhpl.

The singareni area hospital is the biggest one in the singareni areas. Apart from this, We can find many other private clinics in bhupalpally which are also comparable with the superspeciality hospitals. Emergency cases also will be taken. Hospitals like Pradhan, Kiran, karthikeya, Sumalatha, Sreenivasa and many more hospitals are in the public service. Pradhan hospital is one of the oldest and biggest hospitals. Specialists from MGM, KMC will regularly visits bhpl and giving their service to the people. Major hospital managements like pradhan and Kiran hospitals are maintaining good relations with the specialists from KMC, MGM and giving their support by conducting health camps and special weekly visits to bhpl. Recently, physiotherapy hospitals also started in bhupalpally. Dr. Kranthi kumar who did his schooling in bhpl has recently opened his own physiotherapy hospital in bhpl. And many others also interested to open their own hospitals in the near future to serve our mother land. 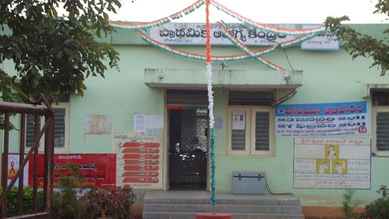 Govt primary health center in BHPL is shown in the fig on the left.

All the facilities are provided to the people with experienced doctors and pharmacists. 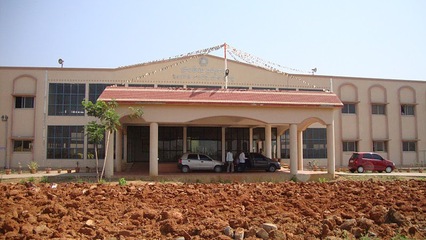 Recently, SCCL opened one area hospital in bhupalpally near to Chelpur with all the facilities.  This is one of the biggest hospitals in all the singareni areas. 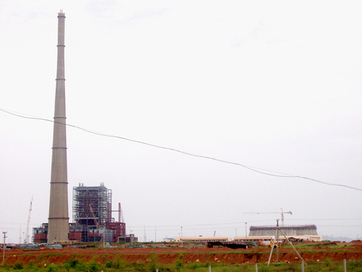 Recently, APGENCO has started Kakatiya thermal power project (KTPP) with 2 stages. KTPP stage-I started with the target of 500 MW (1x 500) power generations. KTPP stage-1 has been synchronized on 31.03.2010 and achieved full load on 27.05.2010 and commercial operation declared on 14.09.2010. The stage-1 of KTPP was dedicated to the nation by the Chief Minister Mr. Kiran Kumar Reddy and directed the energy officials to go ahead with the stage –II on jan 3rd 2011.

The KTPP envisages utilisation of 7,500 tonnes of coal per day and 70,000 cubic metres of water to produce 500 MW of power. The cost per unit was estimated to be around Rs. 2.20, which was lower compared to other thermal power stations in the State. An unique feature of the project was that it had a BHEL-made single generator of 500 MW capacity, which was one among the few in the country.

Create your own unique website with customizable templates.
bhupalpally............